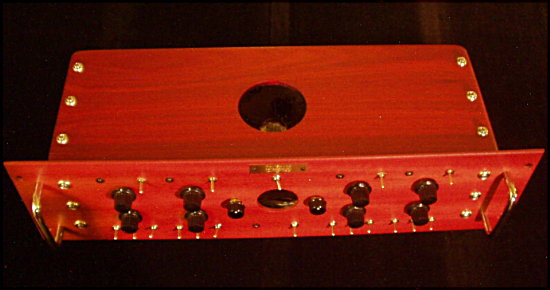 The first TB-5 prototype was begun in the late fall of 2002 with a custom preamp order which, essentially extended the features of the TB-6 to include lo-cut (Hi-Pass) filters and a stereo summing output with associated panpots and individual master controls.

As part of our 2006 "WG" expansion ...
the TB-5 was redesigned for the larger 3RU layout to allow for more space on the aesthetically pleasing "WG" control panel.

As is typical with all "WG" units, there is no front panel lettering to detract from the solid, woodgrain appearance. All controls are obvious to the experienced user and the following layout is offered as a familiarity reference. 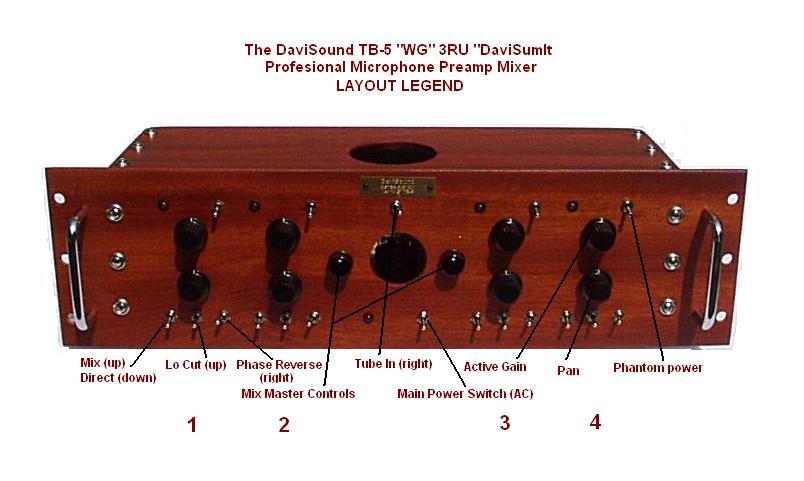 At the top of the panel, traditional DaviSound phantom powering is provided with a discreet, isolated phantom power feed, independently switchable and LED monitored, supplied to each channel.

Just below the gain control, a low impedance panpot routes the signal from the individual channels to either Left or Right sum outputs, or anywhere "in between", in typical panpot fashion. DaviSound panpots are designed so that maximum action occurs nearer the CCW / CW extremes of the pot wiper rotation. This is so that "center" settings are easily repeatable, with channel balance maintained, as adjusted by the individual left / right output master controls.

At the bottom of the control panel, below each channel section, is a cluster of three toggle switches. The first switch, vertically mounted, is the direct/mix switch. With this toggle in the "down" position, the preamplifier output is routed DIRECT to the rear output jack for the respective channel. When the switch is in the "up" position, then the channel is in the "mix" mode and routed to the stereo mix busses via the panpot.

The second, vertically mounted, toggle switch below each channel segment controls a first order 6 dB per octave Hi-Pass filter with appoximate action as follows:-6dB at 100HZ, and -12dB at 50HZ and minus 18dB@25Hz. Switching the toggle to the UP position activates the filter, whereas the bottom position by-passes the filter.

Approximate gain control settings for the MIC-ALL microphone preamps, as determined by the white pointer position on the control knob, are as follows:


The TB-5 mix bus is hand-wired and configured using the same innovative techniques of ALL DaviSound mixers pioneered many years ago in early DaviSound designs. DaviSound mix-busses are NOT configured on Printed Circuit Boards with thin, parallel traces and the inherent problems associated with those methods utilized in commercial mixers!

Instead, DaviSound employs multi-paired, twisted-pair bus wiring techniques similar to those now recently being utilized in manufactured "quad cables". However, our hand fabrication and controlled placement of the routing of these busses within the mix stages offers superior noise rejection and combined, lowest capacitive loading effects which are not achievable by other methods!

In addition to this unique mix bus technique, the new TB-5 "WG" also introduces an "Inner Tube" option with the inclusion of the all new ...
"MPT-1" (MasterPiece Tube Module) circuit block configured as a unity gain, inverting summing amplifier! 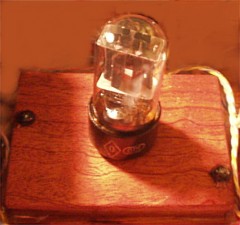 The new MPT block features a hardwood circuit board ...
with all circuit components mounted underneath ...
rigidly embedded in thermal epoxy.

The boards are mounted on one half inch rails for a slightly
elevated position above the cabinet floor.

The first ever MPT used in the first ever TB-5 shown above ...
is made form quilted African Mahogany for a touch of the "exotic" on the inside!

A very nice "floor mount" for the 6SN7 octal tube!

The MP-1 based master output section offers approximately 6 dB of additional through mixer gain to the Mic-All preamp stages with the UNITY gain setting ocurring at approximately 12 O'Clock, with the master control knobs' white pointers in the "straight-up" position. The gain controls of the master stage are just that ... ACTIVE gain controls which offer the same benefits as the active gain controls for each individual stage, as described below.

The additional mix-amp output driver stage of the TB-5 adds negligible noise and distortion to the Mic-All amplifiers as opposed to using the individual stages alone through their own outputs-certainly none that is audible. However, since EVERY stage in any design has to, inherently, add some degree of THD plus noise, measurements of those parameters at the sum outputs will be marginally higher ( about .002% additional THD + Noise combined).

The "Inner Tube" stage in the TB-5 , with the 6SN7 octal packaged dual triode, is in/out switchable and, while configured for unity gain via negative feedback, there is about a 1 dB reduction in level with the tube switched in, as opposed to through the MP-1 sum amp direct, due to low impedance loading effects acting on the tube stage. Although the tube is operating with less plate supply voltage than normally associated with vacuum tube circuitry, the headroom through the Class-A triodes is still respectable at +18 dBU! Since the MPT-1 block is configured as a unity gain inverter with "virtual ground" summing junction very simlar to the MP-1 "op-amp" summer it drives, THD is VERY low compared to traditional tube circuitry and measures under .01% with the tube switched in!

The tube may be selected by flipping the "tube switch", the mini toggle centered just above the control panel center port hole, to the "right" position. Switching to the "left" position completely by-passes the tube stage. 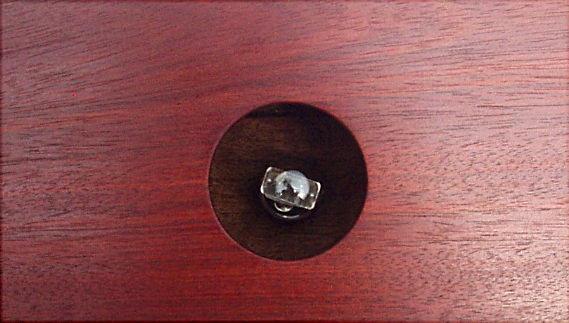 The tube may be removed for replacement by carefully reaching inside the "firehole".
Grasp the tube top between the thumb and forefingers and gently rock it back and forth
while lightly pulling in an upward motion until it works free of the socket.

Either a 6SN7 may be used, as shipped, or a 6SL7 can be employed
for slightly differing performance.

The inaugural TB-5 was the first to use the 2 1/2 inch diameter, now standardized, top access port ...
which seems to be the ideal size for the opening. 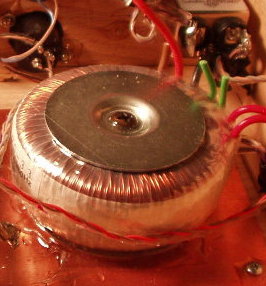 A unique feature of the TB-5 ...
and other DaviSound Tool Boxes ...
which employ sensitive circuitry, such as mix busses, within a necessarily close proximity to the power supply ...
is the Toroid style power transformer.

The XLR outputs are 100 ohms "quasi-balanced" as per DaviSound Tool Box standards with PIN 2 HI and PIN 3 LO. For balanced operation, shields are ground and, according to traditonal schools of thought, should be connected at ONE END only. This, of course, assumes that at least one shield of the multiple connections offers a direct ground to the associated equipment. In practice, leaving shields connected at both ends will probably work as well but, theoretically, shields work better when they do NOT carry current.

The AC power cord IEC EMI FILTER RECEPTACLE and FUSE HOLDER are at the far left of the rear panel.

Unless specifically stated otherwise in individual descriptions ...
and for all Tool Boxes which employ our "MP-2 MasterPiece" circuit module, which is nicknamed the "Mic-All", for the complete signal chain gain block, the electrical specifications are as follows: